On August 4, 2018, the Camden County Prosecuting Attorney’s Office charged Allen Loftis with three felony counts of assault motivated by discrimination. It is alleged that Loftis punched three people at a local bar because Loftis believed the victims were homosexual- at least one person was injured as a result of Loftis’s actions. Loftis was quoted by the arresting officer as saying that he, “does not let gay stuff go on.”

While the Office of the Prosecuting Attorney cannot comment on an open case, PA Heather Miller stated, “My office continues to work with law enforcement, local businesses, and all citizens to make sure that the Lake is a place we are proud to call home. It is vital to our success as a community that we are able to go about our lives without fear of assault or of harassment. The Office of the Prosecuting Attorney remains committed to the safety of those that live in Camden County and those who visit our beautiful lake.”

On April 17th, 2018, Andrew Wayne Lester was convicted by a jury of his peers of five counts of Statutory Sodomy in the First Degree, involving a child under the age of twelve. Mr.
Lester waived jury sentencing.

Today, July 26, 2018, Mr. Lester was sentenced to twenty years in the Missouri Department of Corrections on each of the five counts of Statutory Sodomy in the First Degree. The investigation into Mr. Lester’s crimes began when a child under the age of twelve, known to Mr. Lester, reported the inappropriate contact with a trusted adult.

The Office of the Prosecuting Attorney would like to thank the adults in this case who reported the child’s disclosure, Katie Stewart and Casey Cox for their work on behalf of Children’s Division, Stephanie Dominque for her work as a sexual assault nurse examiner, Diana Sederwall for her work with Kids’ Harbor, and Deputies Stacy Eden and Josh Stockton with the Camden County Sheriff’s Office.

Prosecuting Attorney Heather Miller would especially like to thank the victim and their caregivers in this case, “their unrelenting courage is what made this conviction possible. This child made the conscious decision to speak out—not only to stop this assault but to protect those younger children who could not speak for themselves. I am lucky to have known them and I am humbled by their bravery.”

It is our responsibility to protect our children. If a child discloses abuse to you please contact the Children’s Division Hotline at 1-800-392-3738.

Prosecuting Attorney Heather Miller presented four awards for outstanding performance to officers from the Missouri State Highway Patrol, the Osage Beach Police Department, the Camden County Sheriff’s Office, and the Camdenton Police Department. The four honorees are Trooper Kara Dinwiddie – MSHP, Officer Drew Gordon – OBPD, Detective Shawn Kobel – CCSO, and Officer Jared Lane – CPD. These officers were singled out for their dedication to victims of crime and for their hard and diligent work on several lengthy and complicated investigations.

“These officers consistently coordinate with our office to ensure their cases are solid and are able to be prosecuted to a just conclusion. As a result of that diligence, they are entitled to recognition from this office.” – Heather Miller, Camden County Prosecuting Attorney. 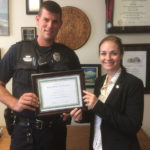 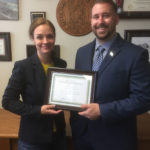 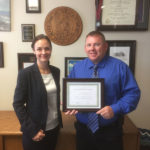 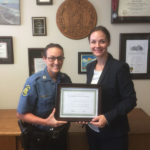 On Tuesday, June 26th, the Camden County Prosecutor's Office successfully argued for the maximum sentence for Daniel Pettis. Mr. Pettis was originally scheduled for jury trial beginning the 26th, but late the night before elected to plead open to the charge of assault...

The Camden County Prosecuting Attorney’s Office is announcing the following sentences handed down by the Camden County Courts this week. Steven Edward Beeler, of Camdenton, was sentenced to 3 years in the Missouri Department of Corrections for the Class C...

The Camden County Sheriff’s Office, the Lake Area Narcotics Enforcement Group, and the Missouri State Highway Patrol have arrested Scott P. Lewis of Edwards, Missouri. According to court records, a search of the vehicle Lewis was driving resulted in 2.14 pounds of...